Contrada della Cerva is a voluntary organization that was born in 1994 to promote and enhance the Palio of Noale that is the most important historic festival of Noale. This festival recreates the activities of the village of Noale, where mostly peasants and hunters lived, during the Middle Ages. The activities of the contrada are divided into three categories: the Medieval market, the musicians and flag throwers and the historic archers group better called hunters.

The Medieval market can be seen during the Palio of Noale and it is close to the Rocca, more precisely at Beggio’s gardens. At the market the visitors can taste the typical Medieval products such as ippocrasso (a spiced wine which is usually served cold), mead that is a liquor obtained by fermented honey, the olive-oil and herbs bread, cheese, infusions, Alchermes and much more. For the visitors who are particularly interested in the Middle Ages, it is possible to see the ancient war machines for example the trebuchet, the torture wheel and the well-known Macchina del Coraggio.

Next to the Medieval market there is the hunters’ area where the visitors can test their abilities with arrows and bows.

The Palio of Noale is an historic festival which recreates the thirteenth century Palio that was held in Noale when the town was under the Tempesta family. This historic competition was established to celebrate the triumphs on the enemies, the survival from plagues and important religious feasts. This festival usually takes place on the third weekend of June and in 2017 its twenty-years anniversary was celebrated.

The main event of the festival is the Palio competition that is a relay race where the competitors are seven pairs of female and male runners who represent the quarters of Noale which are: Cerva, Bastia, Sant’Urbano, San Giorgio, Gato, San Giovanni and Drago.

While the winning pair receives the Palio that is a painted cloth, the losers are stained with black grease as a symbol of shame on their contrada.

During the festival it is possible to taste typical Medieval food, to see the knights jousting, to hear Medieval music and to watch the live performances of different groups of musicians and flag throwers.

The first information regarding the town of Noale can be traced back to the early thirteenth century when there existed a village called Anoalis. According to the most ancient sources, particularly of 1116, the group of the avogari who managed the bishop’s of Treviso endowments, had a prominent role in that period. Around the first half of the thirteenth century, the role of the avogaro was assigned to Guido who was one of the bishop’s avogari, who first used the surname Tempesta which remained the same until the present days. Noale had been under the Tempesta control until 1245 when Ezzelino da Romano attacked the castle belonging to the Tempesta family defeating its guardians. After verifying the large amount of damage, he ordered the reconstruction of a new fortress which in Italian is called Rocca, that was surrounded by deep moats. Its construction was completed in 1272. In the meantime, Noale had developed under the economic and social point of view becoming an important commercial centre where trade was usually held.

In the fourteenth century Noale was involved in several wars. The town had been under the control of the Scaligeri family for a short period (approximately between 1329 and 1339) when Guecello Tempesta made Noale an independent administrative centre which did not rely neither on Padua nor on Treviso. Statutes were issued, a judge was hired by the Tempesta family and a hospital was built. 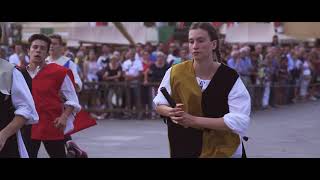 The flag throwers and origins
The musicians group
The group activities