The figure of the flag thrower was born at the end of the fifteenth century during the war period. Among the troops, the flag was in a tactical position being used as a landmark during the battle. The flag throwers threw and waved their flags to signal the most suitable moment to attack, to suggest the actions to be done during the battle and to mark its most significant moments.

As the ages passed by, the flag throwers changed its past roles becoming part of the folklore and of the shows that are held up until now.

The Contrada della Cerva musicians group was born in 1998 in order to walk with the nobles of each quarter of Noale at the historic procession which takes place during the Palio.

The group is divided into two sectors according to the instrument they play: the medieval drum and the clarion. The clarion is a natural trumpet whose main structure is long and its typical sound is high and clear (chiaro in Italian, that is the word from which the instrument takes its name).

During the Middle Ages these instruments were used to introduce the announcements in the squares. As the years passed by, as it happens for the flag throwers, the clarions take part in the historical re-enactment but to attract the audience’s attention.

The Contrada della Cerva drummers and clarions group perform background music for the flag bearers exhibitions which are held in the main Italian and European squares.

WHAT WE USUALLY DO

Exhibitions in the squares

We hold our exhibitions in the most important Italian and European squares. Our exhibitions are carefully adapted for each occasion and they are carried out by two until sixteen flag throwers. They represent a mixture of arts and passion.

They are our source of strength. We are team fellows but most of all friends. This improves our sense of agreement and entertainment while working together and capturing the audience’s attention. 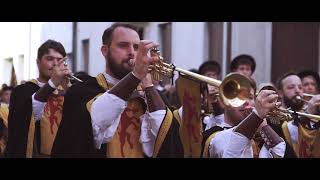 WHAT ABOUT HIRING A GROUP OF MUSICIANS AND FLAG THROWERS FOR YOUR EVENT?
PLEASE FILL THE FORM BELOW FOR MORE INFORMATION